Mention of Rhode Island often conjures up images of sandy beaches, small, charming Colonial towns that showcase historical remnants of by-gone eras along the seaside, and summer fun in Newport. Although it is one of the smaller states, Rhode Island is home to several large cities including its capital of Providence, and it is also home to some great bakeries that can satisfy any cravings for baked goods that you might have while exploring this historically rich state. So let’s take a journey to New England and check out the top seven bakeries in Rhode Island. 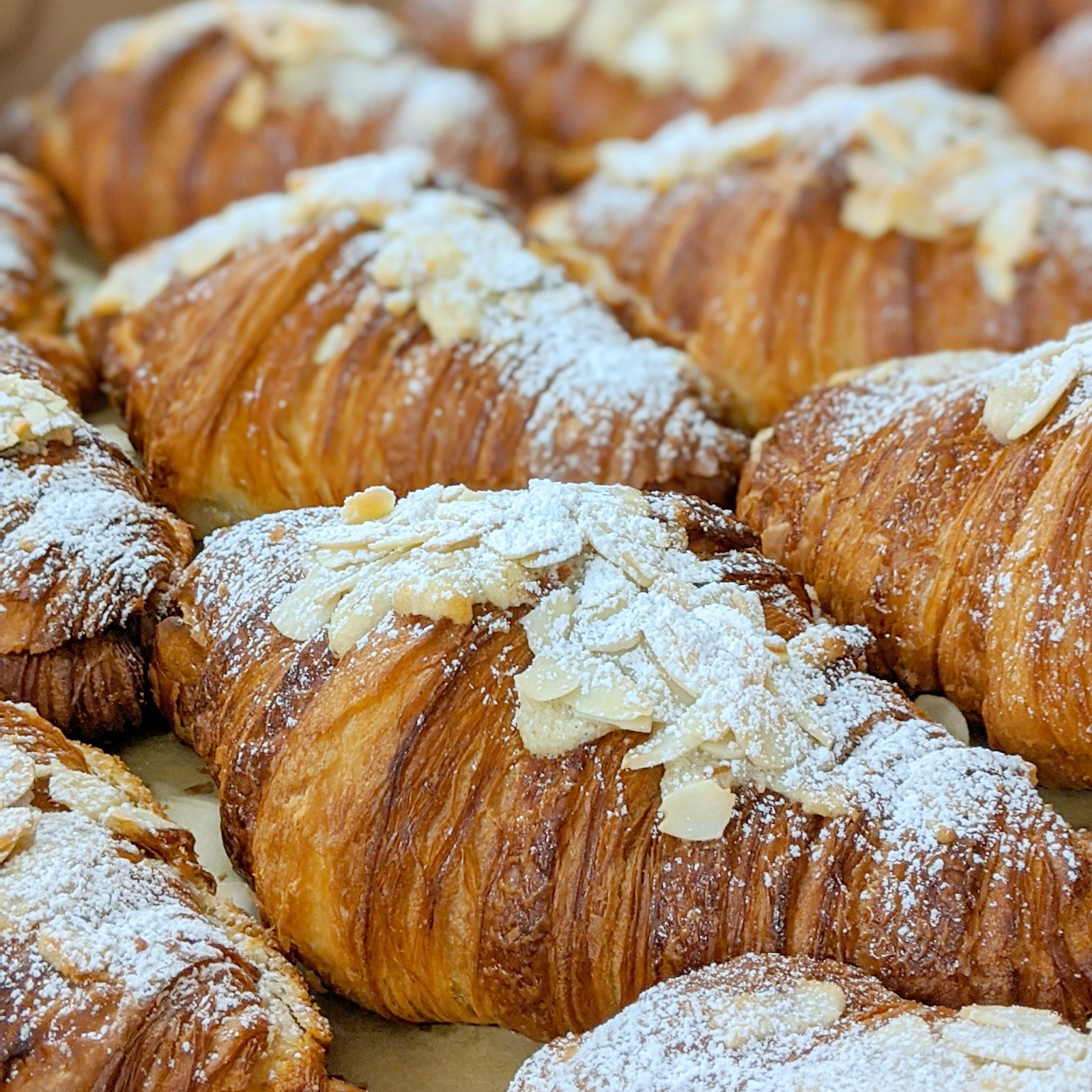 Butterbang is not your normal bakery. This establishment is a pop-up croissant bakery that changes locations frequently in Providence, and it is operated by one person for one or two days a week. As you can tell by the name, this bakery specializes in croissants that you can get in either the classic style, sweet flavors, some savory options, and even some seasonal flavors that come out at different times of the year. You can even get a coffee or a Chai tea to go with your croissant choice!

Butterbang’s pop-up bakery rides around Providence as a bike cart, while the bakery kitchen is located in Olneyville. Owner and baker Brian operates the entire business on his own; it became a dream of his after he became obsessed with croissants on a trip to France. He ended up learning how to make these French pastries for himself because he couldn’t find anything comparable back home in New England. Thus, Butterbang was born in 2014.

Customers are crazy for Butterbang’s croissants! Fan favorites include the chocolate, the almond, and the Dainty Pig, which consists of prosciutto, gouda, and rosemary. 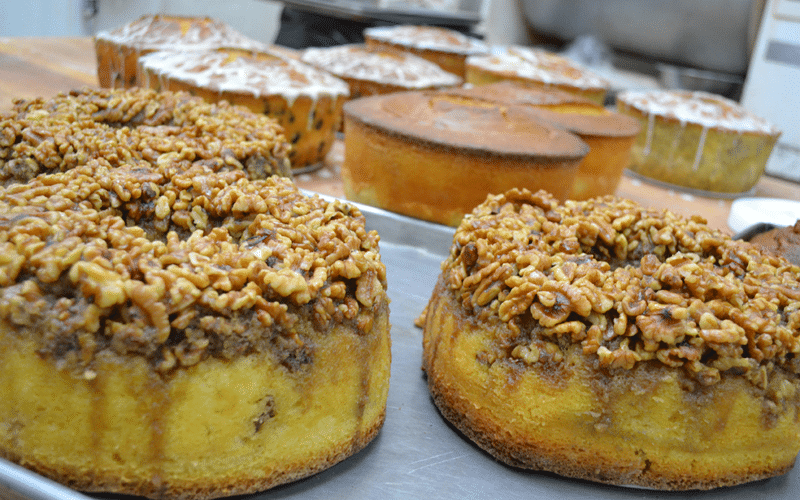 This long-standing Italian bakery offers a wide selection of Old-World style Italian cookies, pastries, and cakes that can be made for any special occasion. Their colorful, beautifully crafted traditional cookies are sure to beckon just about anyone to try them, and their cakes, cookies, and pastries are just as visually appealing and appetizing.

Established in 1916 by Luigi Scialo, one of the first 54,000 Italians that settled on Federal Hill before 1932, Scialo Brothers Bakery was operated by Luigi and his brother for many years, and when Luigi passed away in 1993, his daughters Lois and Carol took over the business and have been running it just as Luigi and his brother did so many years ago, continuing Luigi’s commitment to quality baked goods.

Loyal patrons call this bakery one of the best on Federal Hill, and they encourage anyone new to this establishment to try the cannoli, the fresh-baked loaves of bread, and the Raspberry Chocolate Torte Cake. 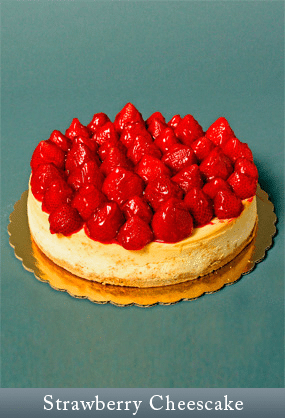 LaSalle Bakery is a staple family bakery in Providence that specializes in pastries, cookies, and cakes that go from the oven into their glass counter as well as custom cakes and sandwiches. That glass counter full of goodies will leave you with your mouth watering, as their cakes are gorgeous and just as tasty and their pastries are much the same.

LaSalle Bakery proudly does things the old-fashioned way and don’t cut corners when it comes to making their baked goods. They take pride in not just being a bakery, but an institution and a place where friends can gather and talk over their delicious pastries, sandwiches, and a coffee.

Customers love the great variety of baked goods at LaSalle Bakery, and they highly recommend the Fruit Tart, the Spinach and Feta Croissant, and their Neiman Marcus cookies. 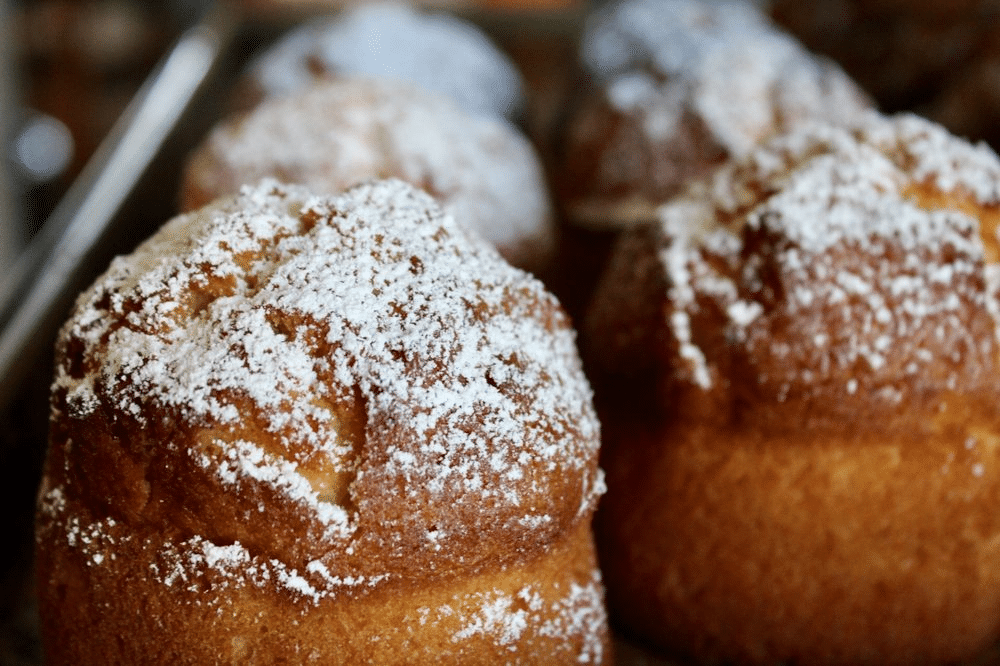 This trendy little bakery and cafe specializes in breads, pastries, cookies, and more goodies made from scratch, as well as sandwiches and coffee that has been carefully sourced. All of Seven Stars’ baked goods are made fresh daily and there is a large variety of eats and treats on their menu such as Danishes, Cinnamon Buns, and artisan breads.

Seven Stars Bakery is a family establishment that began back in 2001 at its first location on Hope Street. With the mission of baking excellent products and treating all of their customers like their personal houseguests, their business grew to the point where they opened a second cafe in 2009, then a third in 2011, an third in 2019, and a fourth in 2020.

Seven Stars Bakery is a local favorite, and loyal fans highly recommend the Cheese Danish, the Pumpkin Muffins, and their Cinnamon Rolls. 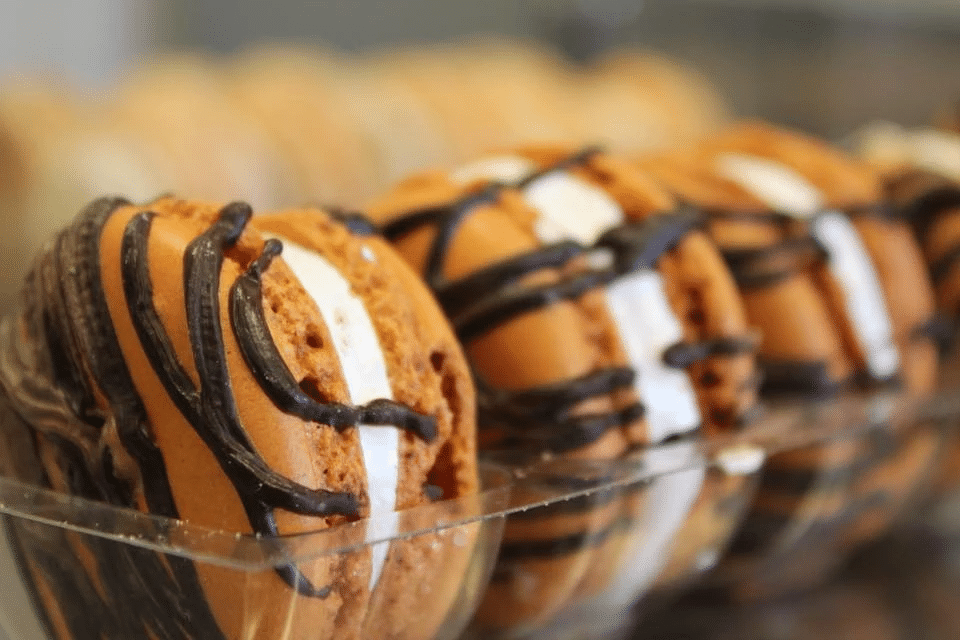 Located in Warren, this bakery and cafe specializes in macarons, regular and small round cakes, brownies, ice cream, and more! The bakery’s extensive menu of macarons includes specialty flavors, classics, and chocolate. Their small cakes, which are six inches across and can feed four to eight people, can be customized any way you want it to suit whatever occasion it is needed for just like their larger cakes.

Owner Tracy says that baking is therapeutic for her, which is how The Perfect Sweet Shoppe Bakery & Cafe came to be. She enjoys making macarons the most because they are colorful, pretty, they have the perfect texture with a center full of flavor, and because they are so pretty, they make a lovely gift.

Patrons love the macarons almost as much as the owner does! The sweet treats that come most highly recommended from this bakery are the brownies, the Lemon Gooey Cookie, and their Pistachio Macarons. 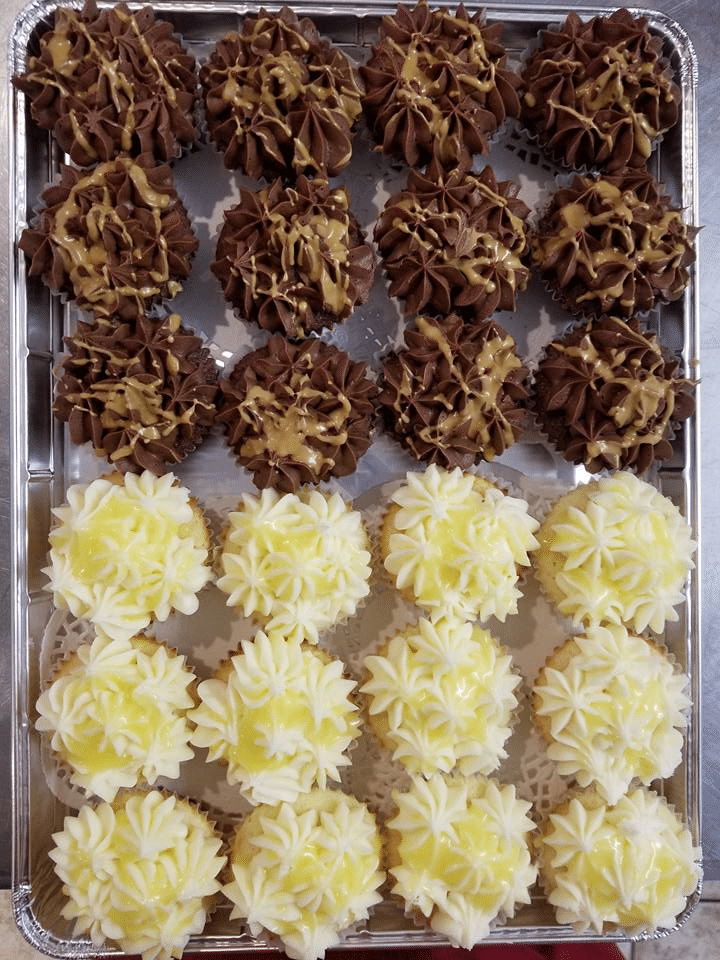 June Loves English Bakery is a small, family-owned business that specializes in and offers a wide variety of English cakes, tarts, flapjacks, cookies, and customized cakes for any occasion. No matter what you might be in the mood for, this quaint little family bakery can satisfy any sweet tooth with its selection of baked goods.

June and her son Nishan operate this little establishment and they are committed to providing New England with baked goods from their old English family recipes. Mother and son make frequent trips back to the village they’re from in Harpham, England, to seek out and bring back new recipes to present to their faithful customers. 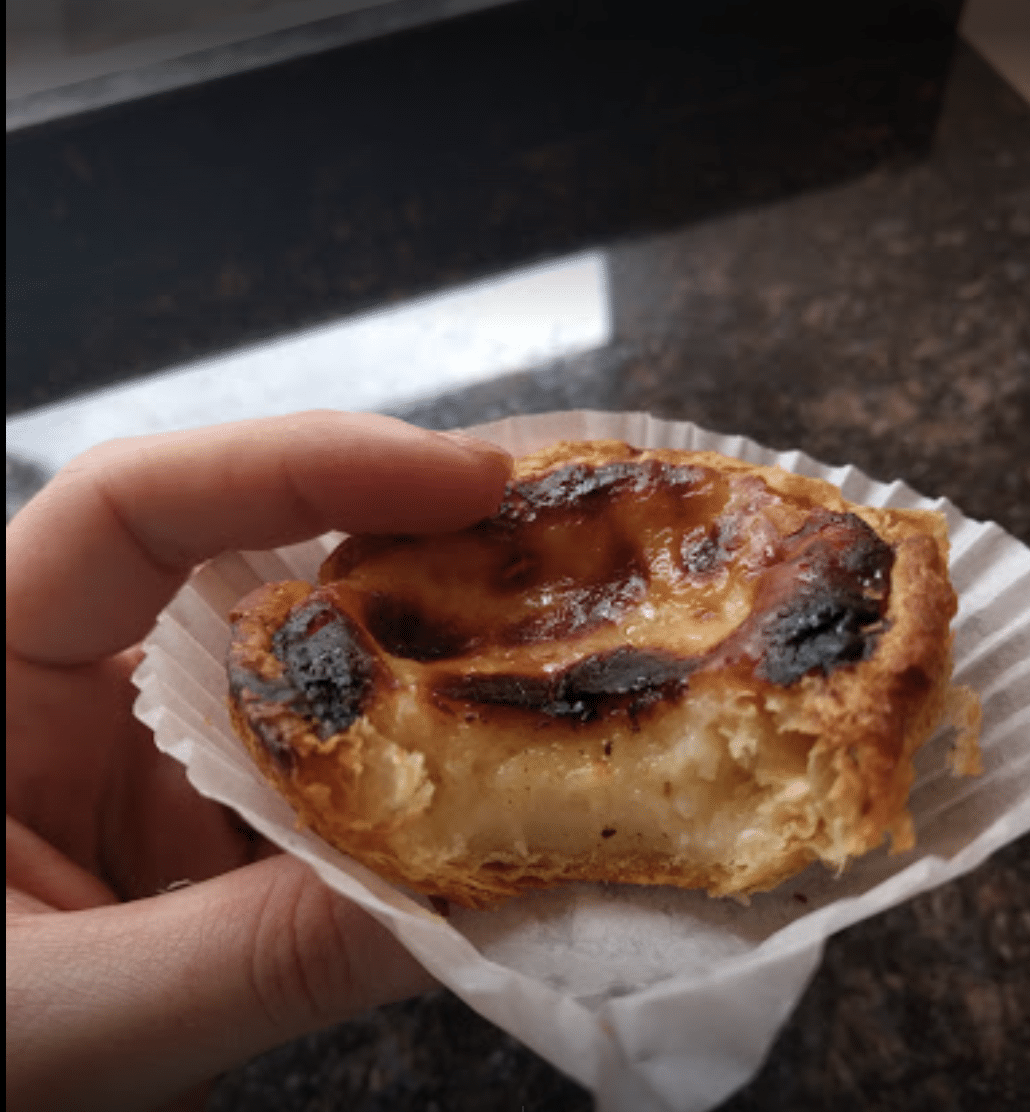 Our final selection, the Silver Star Bakery, is a Portuguese bakery and is an excellent place to get Portuguese sweet rolls, plus a variety of traditional gourmet European and American pastries, cupcakes, artisan breads, and custom cakes.

Silver Star Bakery has dedicated themselves to baking only the best cakes, pastries, and other delectable baked goods that are rich with the heritage of their origin countries, and they promise that there is always something new and delicious to discover.

Customers love the service they get at Silver Star Bakery, and the Pecan Tarts, the Zeppoles, and the Glazed Popovers come highly recommended.

So while you’re checking out the historical and fun landmarks of Rhode Island, make sure that you check out any of these seven bakeries as well – you won’t regret it!