Food is a great way to learn about different cultures. One thing that almost every culture has in common is dessert; all around the world, at this very moment, someone is either making, eating, or daydreaming about dessert. Everywhere you go, however, you will find that although the idea of dessert is the common thread, each culture weaves their own tapestry of sweets based on the resources, flavor preferences, and heritage of their people, and this is most definitely true when it comes to Spanish desserts.

Don’t let the healthy Mediterranean diet of the Spanish lead you to believe that the Spaniards don’t know how to do sweets. In fact, many Spaniards have some type of sweets at least once a day, every day of the week. Spanish desserts are a huge part of the culture of Spain, as each town and city have their own specialties. For example, southern Spain has a Moorish influence, meaning that their desserts are often almond-based, while Catalonia is located just south of the border of France, giving this region more French influences. So without further ado, let’s check out thirteen of the most popular and incredible desserts, both traditional and modern, that beautiful Spain, also called La Piel de Toro (The Bull Skin) has to offer! 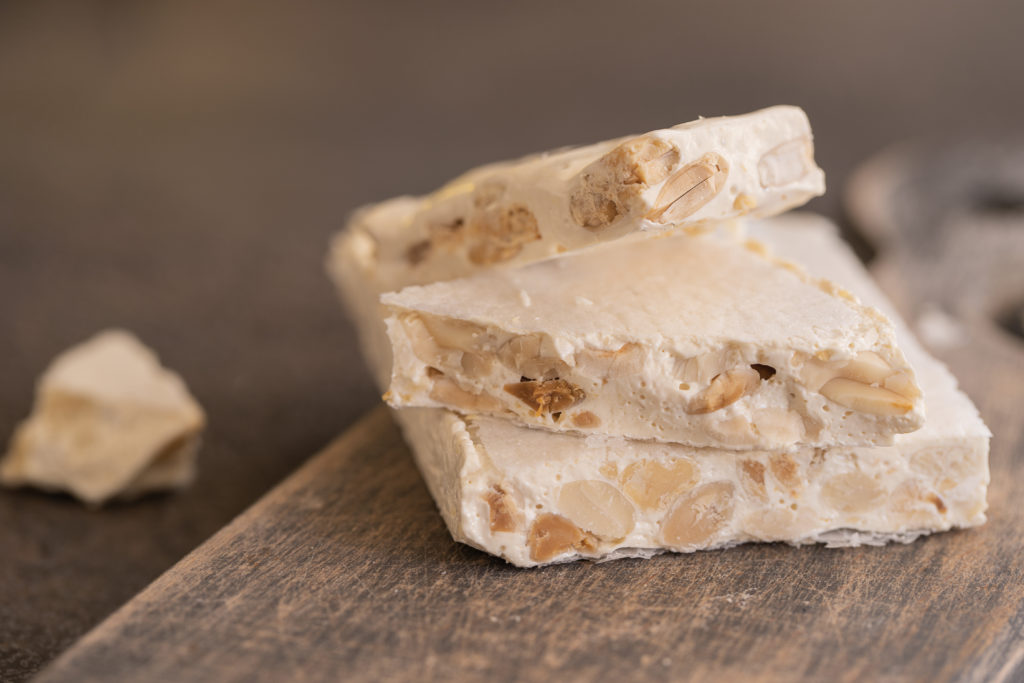 Turrón is an almond nougat that is a classic Spanish Christmas time dessert that was traditionally made with honey and almonds being the main star. More modern recipes for this Christmas tradition are fairly simple and consist of a crispy rice cereal, two different kinds of chocolate, and of course almonds. This combination delivers a rich, sweet flavor that is hard to resist. 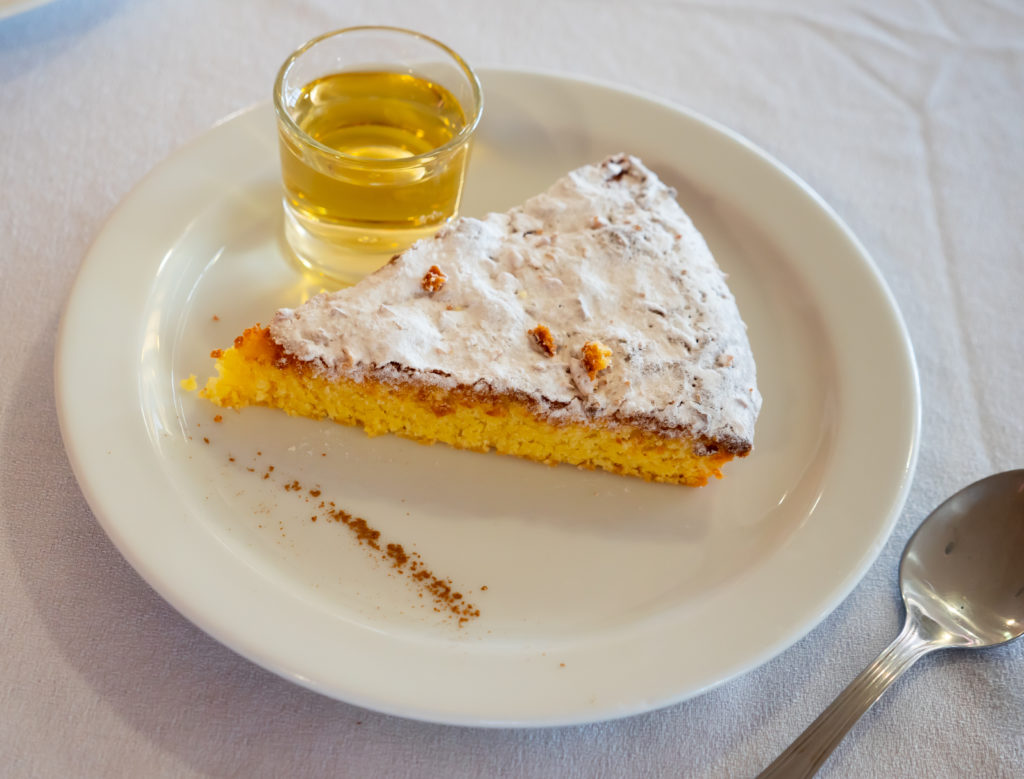 Tarta de Santiago translates in English to Spanish almond cake. This thin, moist cake comes from the town of Santiago de Compostela, which was where St. James’s pilgrimage came to and end, and because of this, the St. James Cross is traditionally put on top of the cake in powdered sugar. This dessert pairs well with coffee and milk or cafe con leche.

These soft and chewy Spanish cookies come from Catalonia and are bite-sized and consist of almonds and sugar, then they’re coated with pine nuts, cocoa powder, candied cherries, or coconut flakes. With a nice crunch from the pine nuts, you get a chocolatey, sweet and nutty flavor in this easy, incredible little cookie. 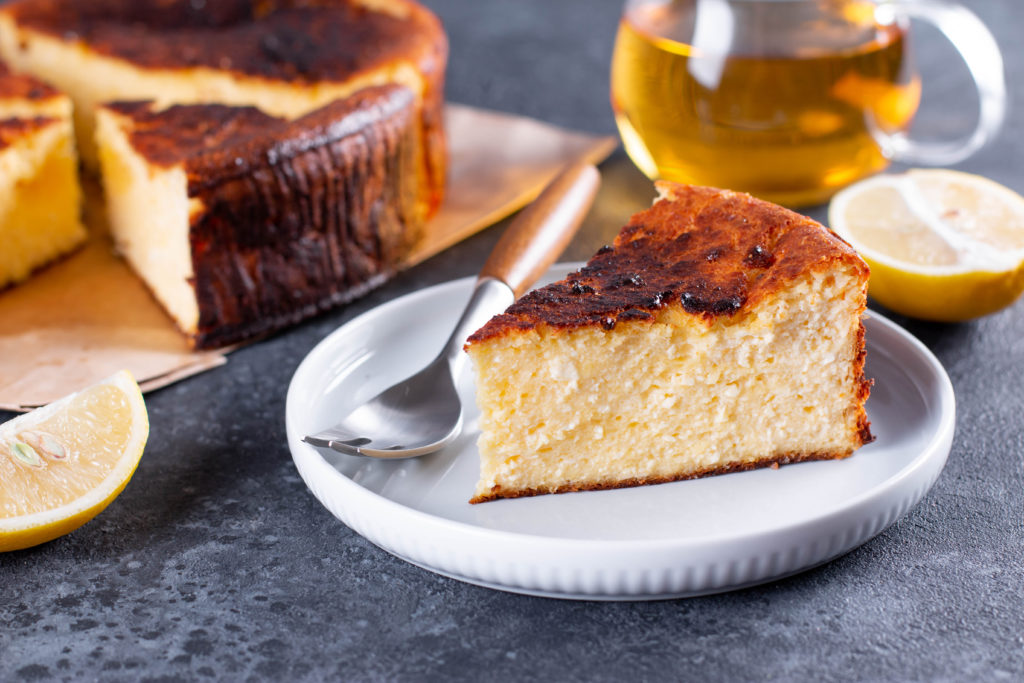 Tarta de Queso, aka Spanish Cheesecake, isn’t what you’re thinking a cheesecake normally looks and tastes like. While the New York Style cheesecake is creamy and dense, Tarta de Queso is fluffy and light with an intense cheese flavor, and if it has a crust, it’s usually dry, crunchy, and puts one in mind of a cookie. Tarta de Queso is a staple Spanish dessert, and you’ll rarely ever seen anything on top of one except for maybe some berries.

Another traditional Spanish Christmas cookie, Mantecados smells like anise and is light and fluffy with a crumbly texture and rich taste. Mantecados are made drop-style, so they don’t necessarily have a uniform shape or size, but you’ll rarely see a Spanish home without these classic cookies at Christmas time. 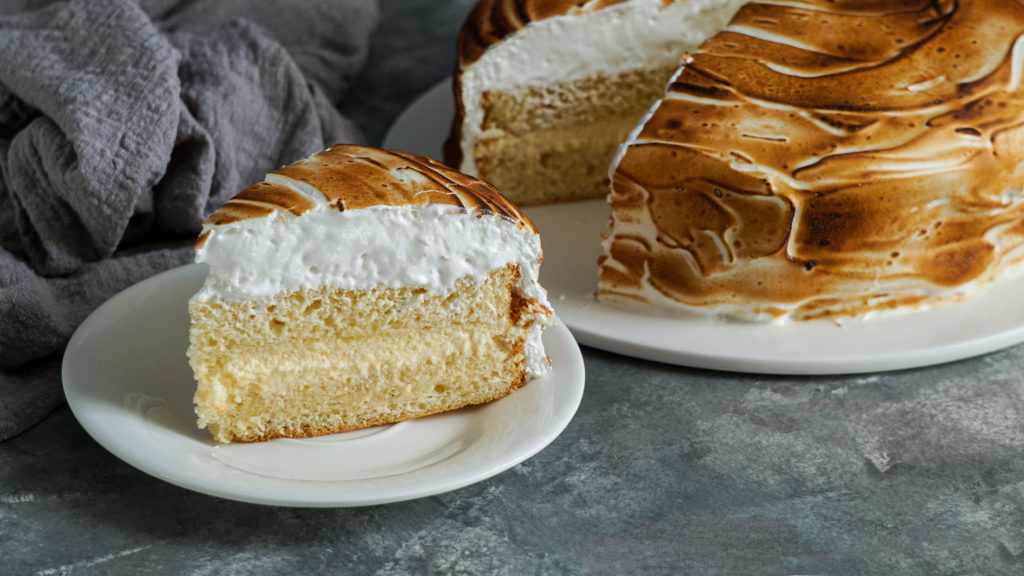 This rich, flavorful cake is easy to make and consists of lemon, almonds, and olive oil, making it an incredibly moist and decadent cake. It is traditionally topped off with some powdered sugar, but you can also top it with fresh fruit, chopped nuts, or a simple sugar glaze.

As one of the most popular Spanish desserts, Leche frita is made and served all throughout Spain, and it turns out it’s actually quite fun to make! The translation of Leche frita is literally “fried milk,” but the milk that is being referenced is cold, sweet, and firm milk-pudding that is surrounded by a crunchy shell from frying it in flour and eggs. It’s great fresh and hot with a scoop of ice cream, but it can also be enjoyed at room-temperature or cold. 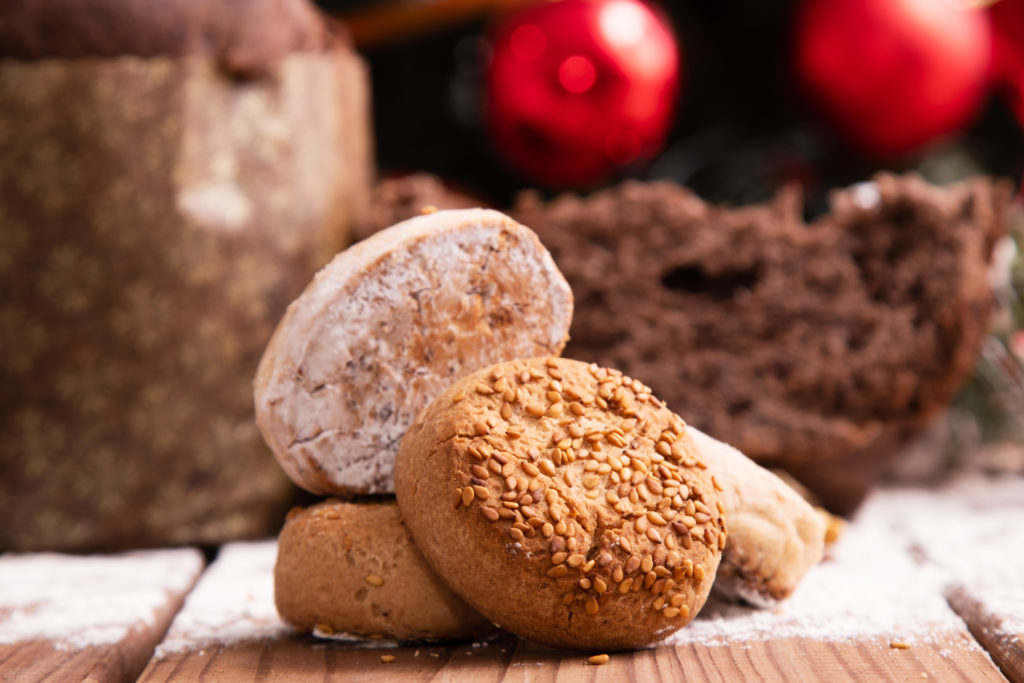 Polvorones are another popular Spanish cookie that are rich and will crumble easily, which fits quite well considering that the word polvo, where the cookie gets it name, literally means dust, and to further the namesake of dust, powdered sugar can also be sprinkled on top of them.

Torrijas have been described as French Toast taken to a new level, and we couldn’t agree more! This rich dessert is traditionally only served in March and April during the Easter season, and consists of fried bread slices that come in three different flavors, which are milk and cinnamon, honey-soaked, or wine and simple syrup. 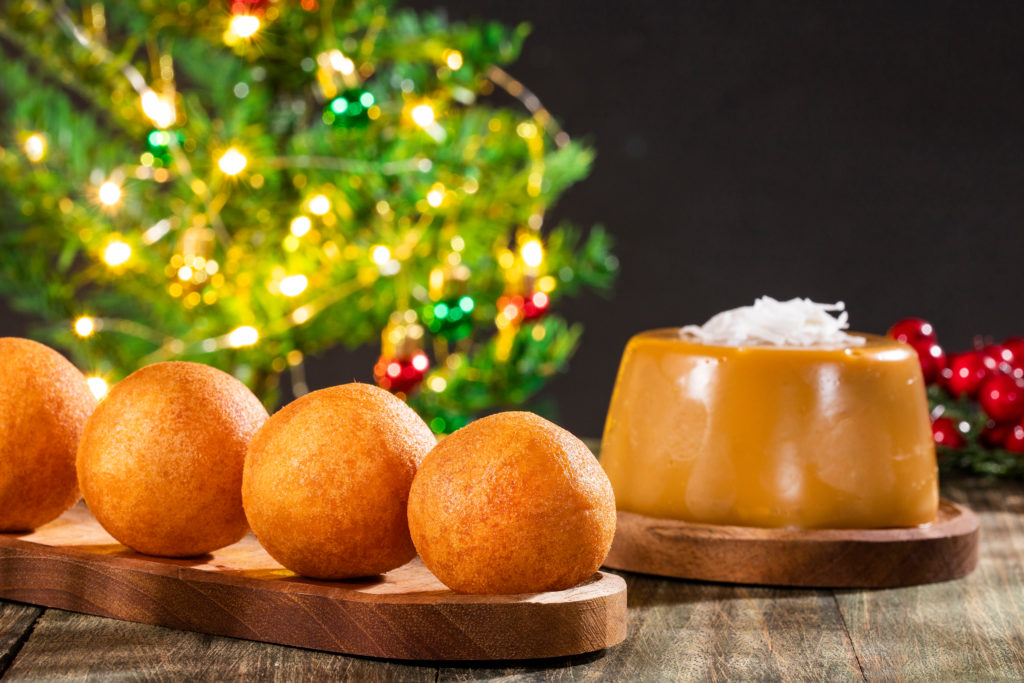 These sweet, soft little fritters called Buñuelos are another Spanish Christmas tradition filled with either custard, pastry cream, or marmalade and then dusted with powdered sugar. If you’re looking for something to compare them to, they put one in mind of bite-sized donuts.

Probably one of the most recognized Spanish desserts is flan, which is made with vanilla egg custard and then topped with a sticky sweet caramel sauce. You wouldn’t expect this dessert to be one that Spaniards watching their diets would eat, but it actually is, and that is because it’s light but still delivers a rich, decadent flavor. 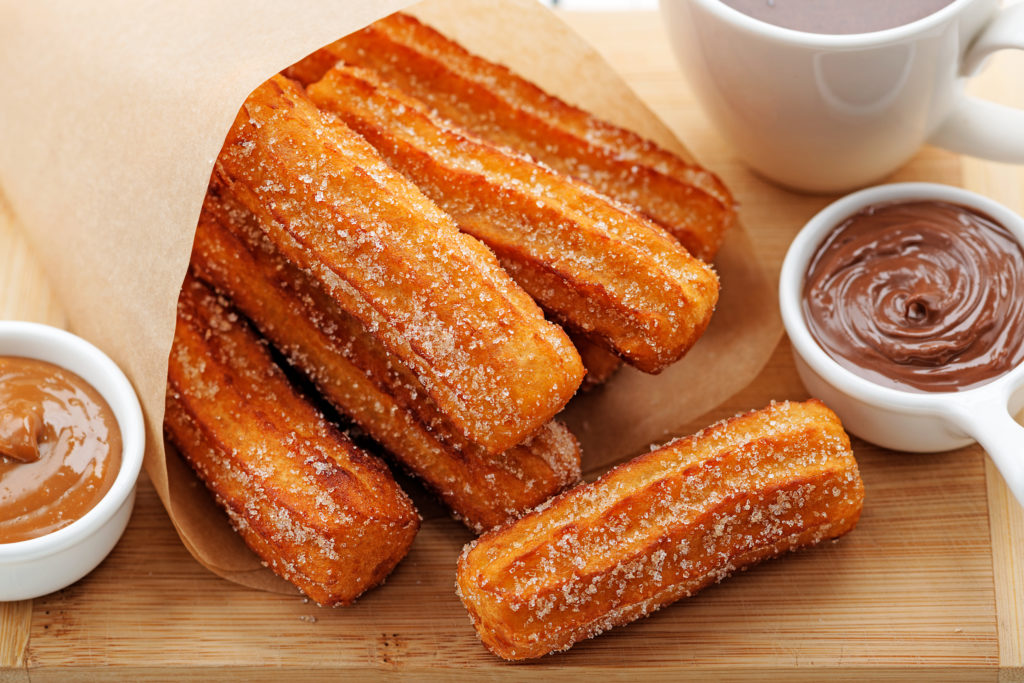 Churros are another popular sweet in Spanish culture, and their appeal is amped up even more with melted chocolate for dipping. Churros are tubes of fried dough that are traditionally rolled in cinnamon and sugar, and they’re popular at all times of the day from breakfast all the way up to a midnight snack.

Discovering and trying new things is what life is all about, so we hope that these thirteen incredible Spanish desserts will help to guide you on your journey of desserts from different cultures!