When you think of cakes, your mind may automatically drift to birthday parties, cake walks, and bake sales, not to mention all of the types of cake there are out there. From classics like simple chocolate, vanilla, Red Velvet, and Carrot Cake, to more complex cakes decorated to the nines for a special occasion, cake has certainly made its place in the world and isn’t going anywhere any time soon.

Along with all of the favorites and more conventional cakes, however, there is a cake that doesn’t get nearly enough credit, and while it might be mentioned in passing, not too many in this day and age know what it is, and that is the flourless cake. I know what you’re thinking, isn’t flour in some form necessary to achieve a cake? Useful, yes, but necessary? Not exactly. Read on to learn more about what a flourless cake is, whether they are baked or not baked, and the history of how flourless chocolate cakes and other flourless cakes came to be. 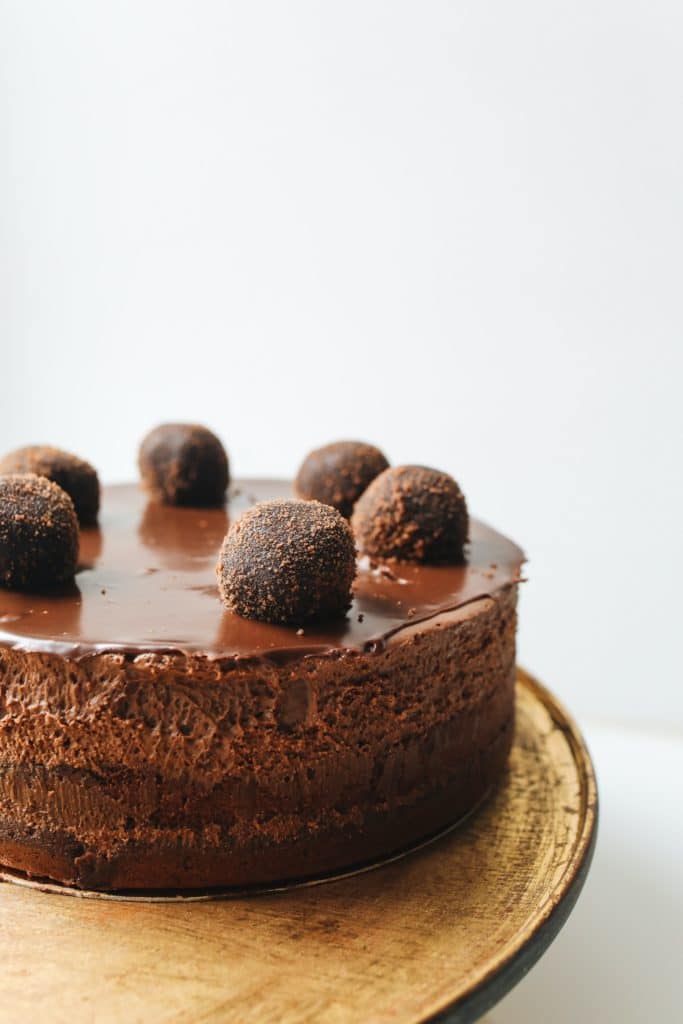 What is a Flourless Cake?

A flourless cake is a cake that can be baked or unbaked, and contains absolutely no flour. Cakes made without flour tend to have a creamy, silky texture as well as a rich flavor when you take a bite. This is because instead of flour, the recipe has egg foams made of whole eggs or just the yolks, lots of added fats from sources like butter, cream, sour cream, or cream cheese.

All of these components are mixed together in such a way that little air is incorporated so that the cake doesn’t rise in the oven and then fall flat due to no flour and softening fat. However, there is a similar chocolate cake with little to no flour in which the egg matrix is allowed to fall and is known as a “molten” or “fallen” chocolate cake that has been made famous by Jean-Georges Vongerichten’s restaurants of France, among others. 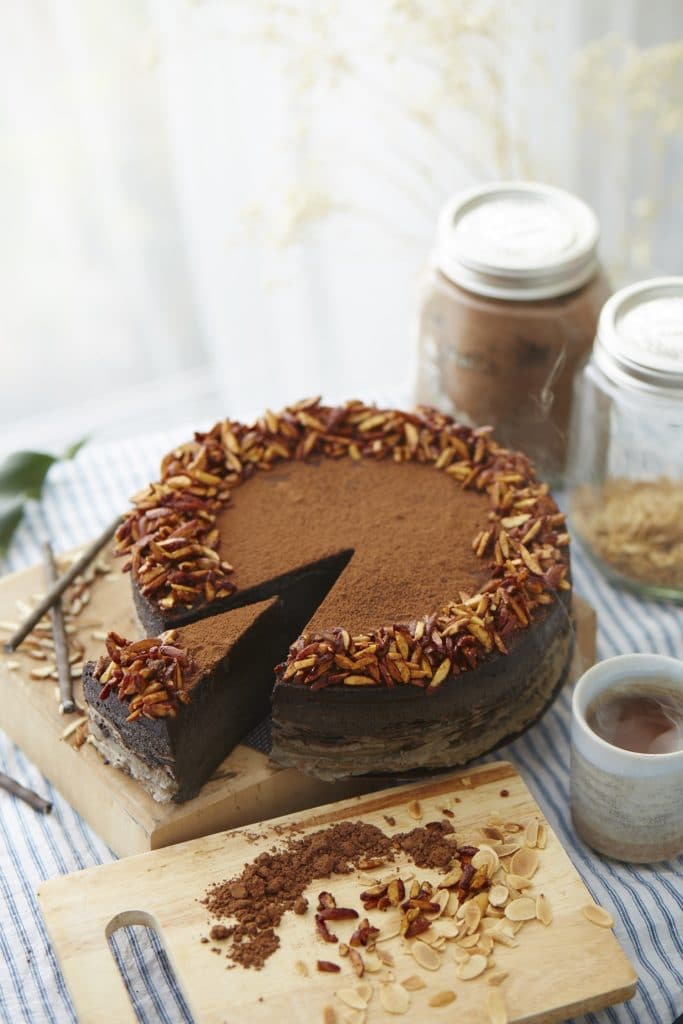 A baked flourless cake is usually of the chocolate, vanilla, or cheesecake persuasion, even though a cheesecake is a custard regardless of whether it’s baked or not. With the exception of the cheesecake, a flourless cake is often baked in round layering cake pans that are sat in what is called a water bath, meaning that the cake pan is placed in another pan half full of water to act as insulation against the harsh heat of the oven, which can leave the cake with a porous texture rather than the creamy, silky one everyone loves. Since the cake doesn’t have flour in it, rather than having a cakey texture, it is more rich, dense, and fudgy.

A couple of examples of flourless cakes are two classic favorite unbaked cakes, cheesecake (considered to be a custard if not baked) and mousse cake. Both of these cakes have a crust that has been made and baked beforehand and then had the filling poured into it. To make unbaked flourless cakes easy to remove from the pan, most folks make them in a springform pan. Usually, one would make the crust or layers for the cake and use the springform pan to keep everything in place while the cake chills. Once it’s completely chilled, it can be easily taken out of the springform pan with little to no fuss.

The History of Flourless Chocolate Cake

The flourless chocolate cake can trace its history back to the Italian Island of Capri, where there are several stories of how this cake came to be. One of those legends is that an Austrian princess wed the King of Naplesho and desired an Austrian Chocolate Cake, also known as a Sacher Cake. But the Neapolitan chefs didn’t know how to prepare this cake, so they improvised and ended up coming up with the Caprese Torta, also known as the Flourless Cake.

Another story of the history of the flourless chocolate cake is that a baker simply forgot to add the flour into his cake mix. However, other countless legends talk about scenarios such as a tired, frazzled woman overlooking the flour in the cake that she was making for some famous American gangsters, and a tired chef making the mistake of adding cocoa powder to his cake mix instead of flour. Even though the true story of how this cake came about may never be known, all of the stories we’ve presented all have one thing in common; the invention of this cake was because of a mistake. The chefs either made the mistake of not adding the flour or accidentally substituted it for something else.

Along with chocolate, there is also a multitude of recipes for flourless vanilla and almond cakes among many other flavors and variations, so if you decide to undertake making a flourless cake for yourself, there are lots of options to choose from.

Why Make a Flourless Cake?

Why make a flourless cake? Well, why not? For those of you wondering if flourless cakes are healthier, the short answer is yes, because the cake is still delicious and indulgent without the flour content. Many flourless cake recipes are great alternatives for those who are on gluten free diets as well.

Due to religious reasons, those of the Jewish faith make flourless cakes during the holiday of Passover because they aren’t allowed to eat anything containing flour during that time, making it a great kosher dessert option.

So if you’re looking for a rich, flavorful dessert to make for the holidays or any time, you should consider trying your hand at a flourless cake. Although it may sound strange to those who haven’t tried it, until you’ve tasted the first rich, silky bite of a fudgy flourless chocolate cake, you don’t know what you’re missing!