February is here, and we all know what that means! It seems like almost everywhere, including your local grocery store, you see chocolate candy lining shelves, specialty goodies like cookies, cakes, and cupcakes all decorated in reds and pinks in anticipation of Valentine’s Day, which falls on February 14th.

A Brief History of Valentine’s Day 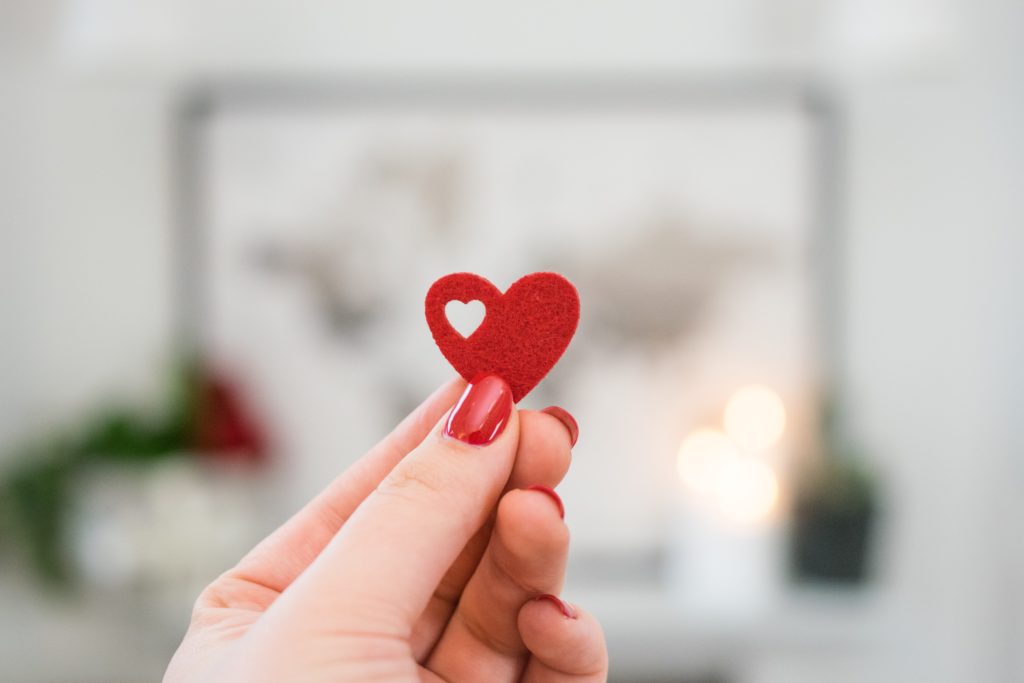 The history of Valentine’s Day begins with one of the legends of patron saint St. Valentine, who was a Catholic priest back in the third century, had decided to perform marriages against the wishes of Emperor Claudius II. He banned marriages because he was of the belief that single young men made better soldiers than those who were married with families and therefore had banned young men from marrying. Valentine saw this as a gross injustice and continued performing marriages anyway in secret for young lovers. Once it was discovered by Claudius II that Valentine had disobeyed his orders, Valentine was ordered to be put to death.

Although there are other stories and legends that allegedly tie in with the origin of Valentine’s Day, including it being the Christianization of the pagan holiday Lupercalia, all the same it’s since been established as a holiday dedicated to romance and wooing the one you love.

The first actual mention of Valentine’s Day as a romantic holiday is in the works of Geoffrey Chaucer in 1382. But the medieval period is when we truly began to see part of what makes Valentine’s Day what it is; illicit, yet chaste courtly love had become a thing by that point with Knights presenting their fair maidens with roses and singing of their undying love and beauty. However, at this point sugar was still a precious commodity in Europe, so chocolate wasn’t being exchanged as gifts nor even thought about for doing so.

So, how did it become custom to give candy, chocolate specifically, to your special someone on Valentine’s Day? This is because since the time of the ancient Aztecs, chocolate has been considered an aphrodisiac, containing ingredients that cause the fires of desire to burn hot. So because of this, it became a custom for European royalty to gift their lovers chocolates mixed with amber in order to inspire romance.

By the year 1840, Valentine’s Day was already well established as a holiday of love and romance as it was the golden age of Cupid. The more conservative Victorians had romantic notions about courtly love and therefore would exchange elaborate cards and gifts on the day.

Then came Richard Cadbury. Yes, Richard Cadbury of Cadbury Candy fame. It was around this time that he had recently improved his company’s chocolate making techniques and had developed a delicious eating chocolate. Not being one to miss a marketing opportunity, he began marketing these new chocolates in fancy, beautifully decorated boxes that he had designed. It was at this time that the familiar pictures of roses and Cupid on heart-shaped boxes full of chocolate came to be, and it’s said that even though Richard Cadbury wasn’t the one to patent heart-shaped candy boxes, he was indeed the first to produce them. 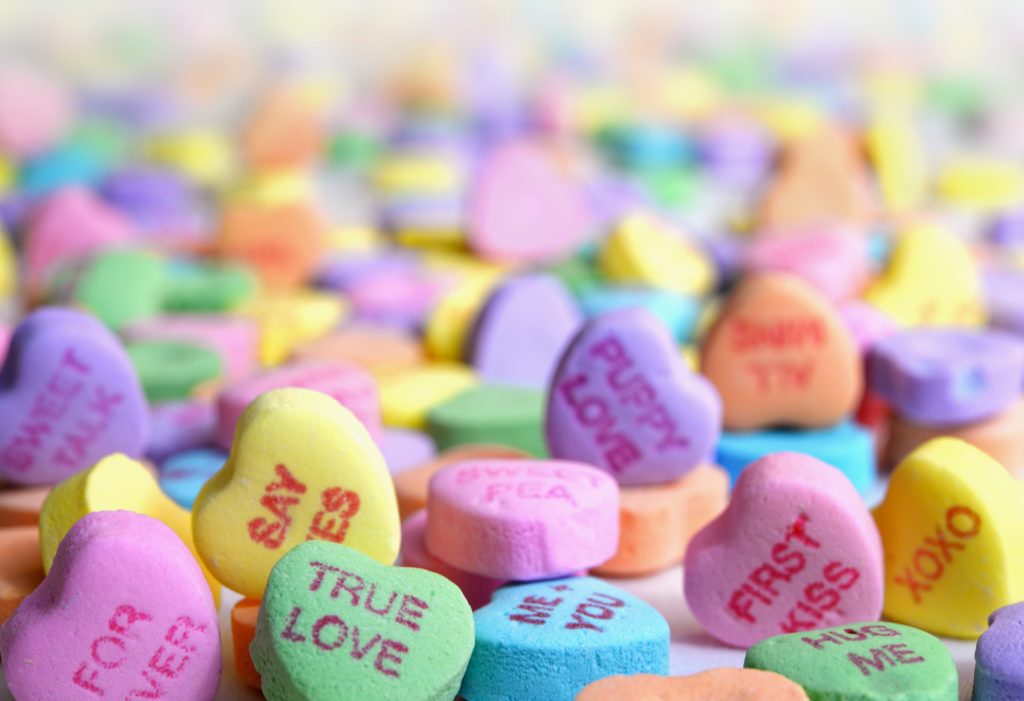 The famous Sweethearts conversation heart candies came about later on in 1866 when Daniel Chase created a machine that could print letters made with food dye onto the candy lozenges produced by his brother Oliver, the founder of the New England Candy Company, now simply known as NECCO.

Valentine’s Day traditions have since shifted with the tides of time. Heart-shaped boxes of chocolates and conversation hearts are still popular around this time of year, but the notion and celebration of Valentine’s Day has extended into other industries such as restaurants and baking, going so far as to have Valentine’s Day meal specials as well as of course cakes, cookies, and other baked goods to represent the holiday.

In the face of the COVID-19 pandemic, the last year has totally reformed how some of us live our daily lives. Many of us are staying at home a lot more, cooking fresh, homemade meals and desserts for our families instead of going out to eat. So whether you’re planning to stay at home for a nice, intimate Valentine’s Day or you’re just wanting to do something extra special for your sweetie, we’ve compiled seven of our favorite special desserts for that special someone on Valentine’s Day!

It’s easy to make chocolate covered strawberries, which have seen a surge of popularity over the last decade, especially around this time of year. This is a dessert that you can certainly get creative with, so you can make just plain chocolate dipped strawberries, or you want you can get a bit fancier by dipping them in and drizzling them with other types of chocolate; you can even inject them with alcohol to make them a boozy Valentine’s Day treat! 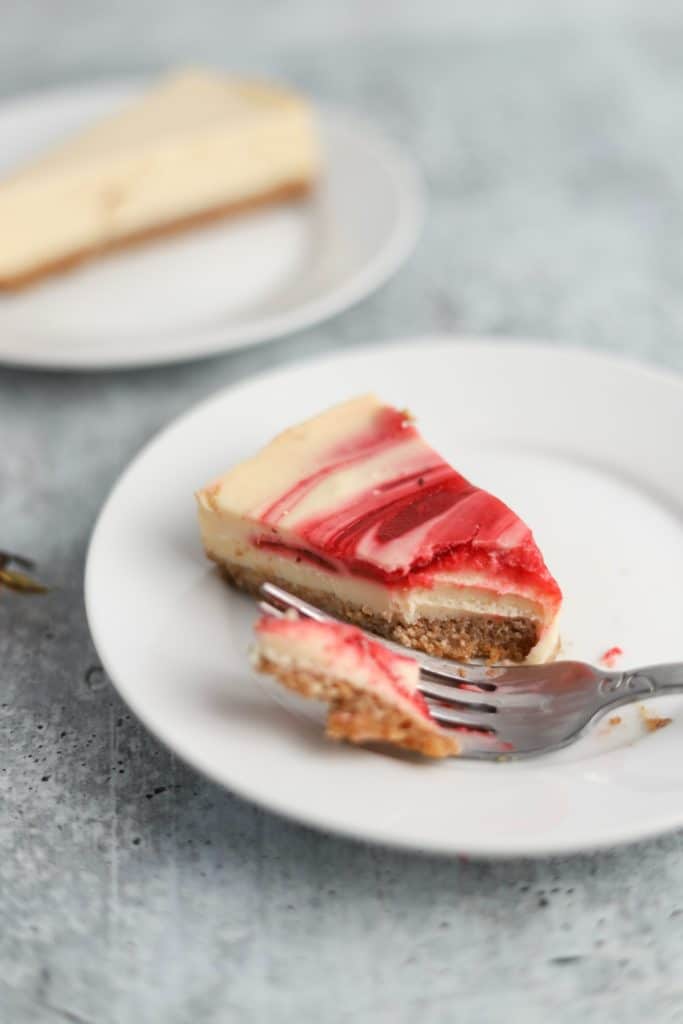 Nowadays, you can find heart-shaped baking pans in metal or disposable aluminum varieties, and seriously, who doesn’t like cheesecake? Whether you choose to bake a cheesecake or make one that you can place directly in the refrigerator, making your cheesecake in a heart-shaped pan and either cherry or strawberry pie filling makes a beautiful, tasty addition on top makes a sweet visual of what the holiday is all about, even down to the beautiful shades of red. 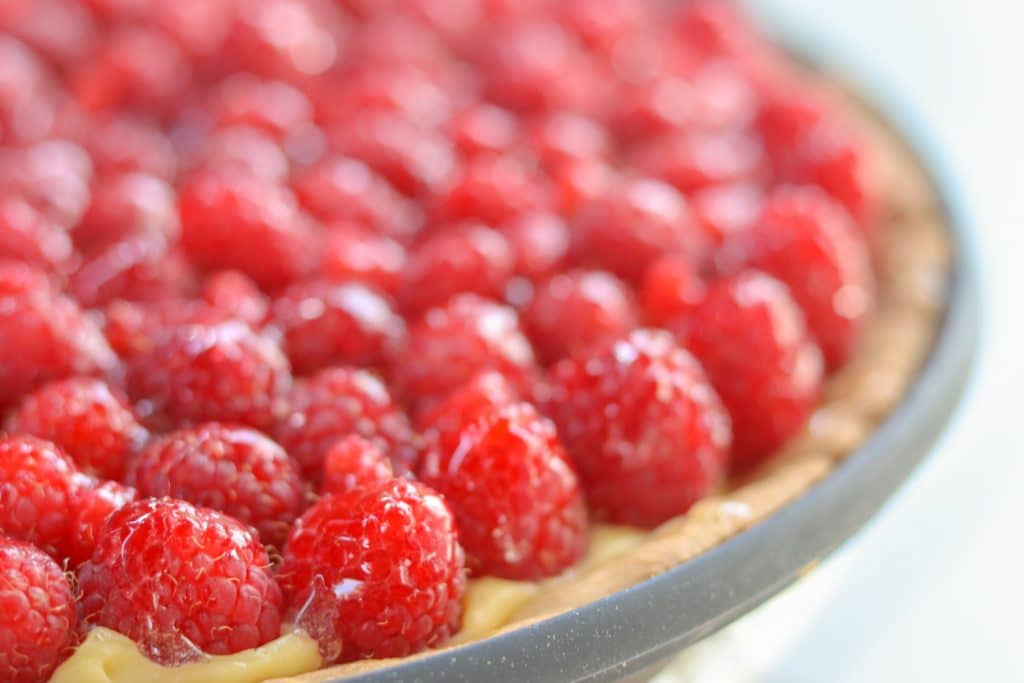 With a buttery, savory, and crunchy shortbread crust, rich chocolate filling, and fresh, sweet yet tart raspberries, this dessert combines these flavor elements to create an irresistible Valentine’s Day dessert. 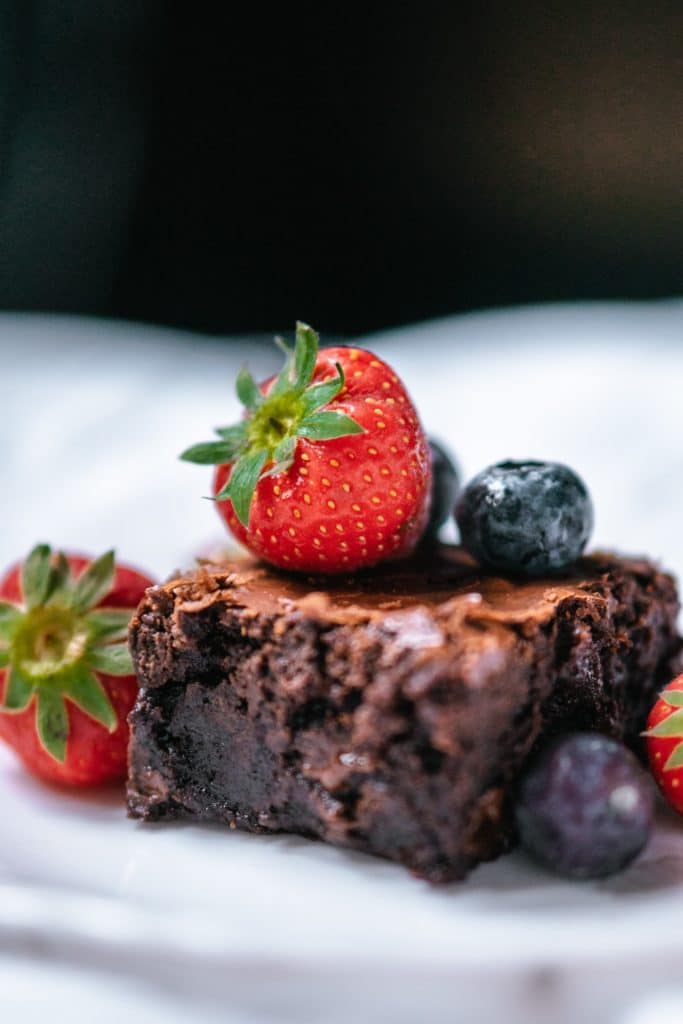 Okay, we know we’ve covered chocolate covered strawberries, but honestly, who can resist a brownie? These rich, decadent brownies offer the fresh, juicy bite of strawberries as a hidden gem amongst the delicious, fudgy chocolate. So if you prefer to have your fruit completely hidden in chocolate, this is one way to go! 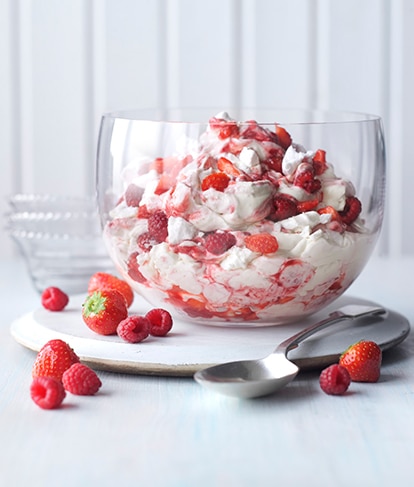 This is a take on a classic British dessert, made with whipped cream, meringues that you’ve either made or purchased, and fresh, delicious strawberries. It looks pretty and it tastes amazing, and it’s super easy to put together! 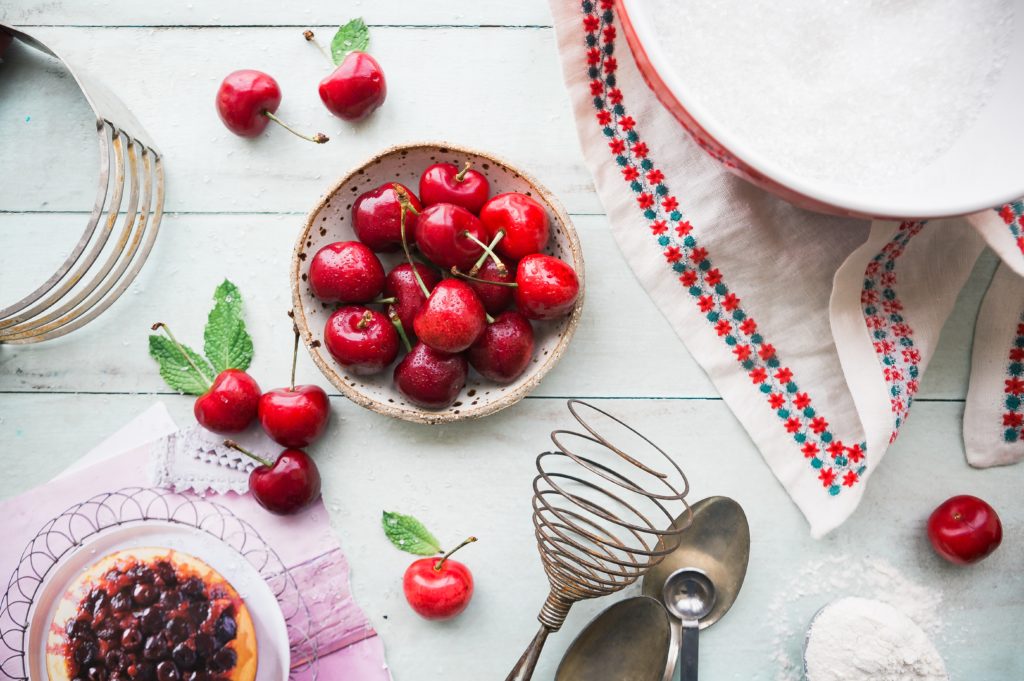 This used to be a popular dessert at fine-dining establishments back in the 1960’s along with crepes suzette. The triple-cherries being referred to in the title are sweet cherries, dried cherries, and cherry juice that are combined with vanilla bean and orange peel to give an amazingly rich and sweet, yet tart flavor! This is best served with vanilla or cherry-vanilla swirl ice cream. 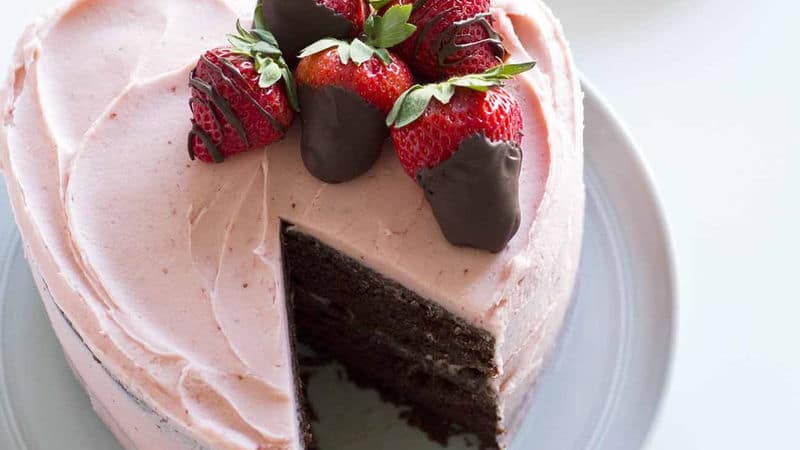 Remember how we were discussing those heart-shaped pans earlier? This of course also works if you want to just bake a heart-shaped cake. Whatever your sweetie’s favorite kind of cake is, whether it be chocolate, vanilla, or anything else, bake it up in a heart-shaped pan, then frost it and decorate it how you feel is best. This is one of those desserts that has no specific recipe or even a specific method – just follow your heart and create something you know your special someone will love.

Valentine’s Day is meant to be special and to show your loved ones how you truly feel, and we hope these seven recommendations for special desserts for that special someone on Valentine’s Day help you to come up with something amazing for the day of love.