There are just some pleasures in life that most people can understand on a universal level, like the first cup of morning coffee, quality “me” time, and fresh, sticky, sweet cinnamon rolls. Cinnamon rolls, also called cinnamon buns, cinnamon swirls, cinnamon snails, and cinnamon Danishes, are sweet rolls that are commonly served in Scandinavia and other parts of Northern Europe and North America.

Traditional cinnamon buns are made with yeast-leavened dough that has been rolled out into a sheet and sprinkled with a layer of cinnamon, sugar, butter, and sometimes even raisins. Once all components have been added, the cinnamon roll is then rolled into a log, cut into individual portions, and either baked or deep-fried. One of the most popular ways to serve a cinnamon roll is hot and fresh with a decadent powdered sugar glaze that melts over the bun, adding even more moisture and richness.

Cinnamon buns originated in Sweden as bakers began using cinnamon in their pastries, which led to the development of kanelbullar, or cinnamon buns, many years after the Roman spice traders brought cinnamon over to Europe from Sri Lanka.

Since its initial inception, the cinnamon roll has become quite a popular breakfast, dessert, and anytime treat all around the world; everywhere you go, someone always has a different and unique approach to this classic pastry. So let’s go on a journey around the world and check out ten of the most creative (as well as some more traditional) cinnamon rolls from around the globe.

The originators of the cinnamon bun, Sweden’s variation of this decadent delight, kanelbullar, is made with cardamom dough and cinnamon sugar filling. Then, instead of rolling and cutting the cinnamon rolls, Swedish bakers twist theirs into little knots and bake them. Instead of icing, traditional Swedish cinnamon buns are topped with crunchy, chunky Swedish Pearl Sugar. 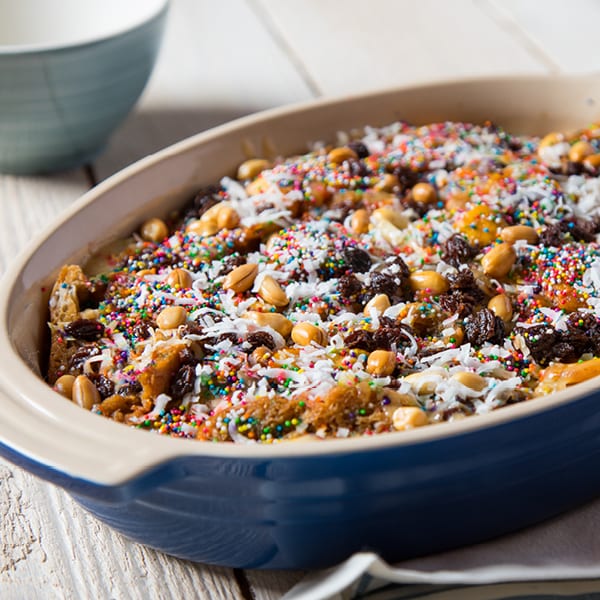 Capirotada is a Mexican bread pudding that is often served during Lent, as it provides extra protein for anyone abstaining from meat on Fridays. It contains a delicious combination of melty cheese and honey, plus any other kind of nuts you prefer, raisins, and cinnamon. Instead of a roll that you could pick up with your fingers, this dish has a thicker, richer, more pudding-like consistency.

Matcha is finely ground green tea leaves; it is incorporated into this unique Chinese variation of the cinnamon bun. First, bakers prepare a slurry starter, known in China as tangzhong; it is then added to the dough to achieve a light, fluffy, and soft bun. The matcha powder gets mixed in with the bread flour and other ingredients later on. Then, a sweet red bean filling is prepared with sweet red bean paste, unsalted butter, and cinnamon. Once rolled, the buns are cut, left to rise, and then baked just like other cinnamon rolls, then topped with your favorite icing.

Chelsea Buns are the British variation of the cinnamon roll, named after the famous London neighborhood and made with raisins and are thicker, heartier, more sticky, and less gooey than their traditional pastry counterpart. They can either be frosted with traditional cinnamon bun icing just after they come out of the oven or they can be served without glaze. 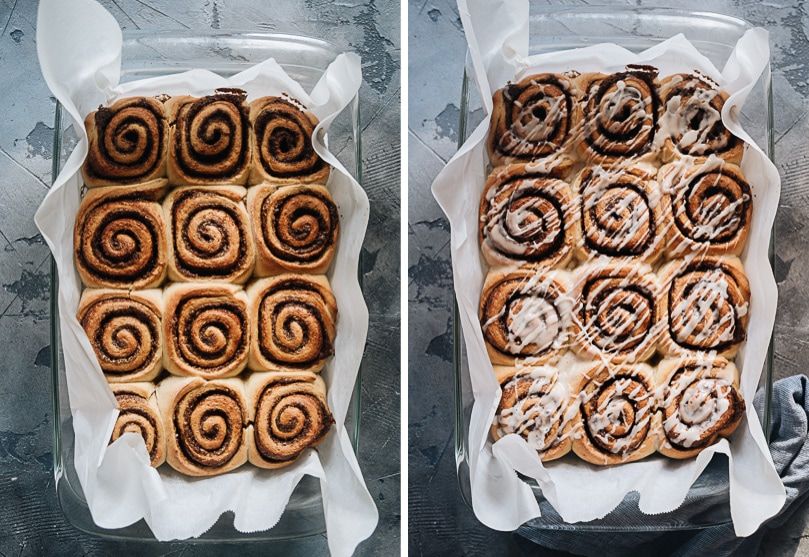 Made with a Japanese milk bread formula, these light, fluffy rolls have a crispy crust, a filling of cinnamon sugar and buttery sesame paste. They are then topped with a powdered sugar glaze that can also incorporate sesame for some extra sesame flavor.

This Finnish delight is a cake that is made from placing cinnamon rolls into a pan together without spacing, allowing them to come together to form one big cake. Once baked, it’s drizzled with traditional icing and sprinkled with pearl sugar.

Franzbrötchen is the German variant of the cinnamon bun: a small, sweet pastry made with butter and cinnamon, or sometimes chocolate and raisins. It was inspired by French pastries. This variety originated in and is typically found in North Germany, particularly Hamburg, but it’s more widely available in Berlin, Bremen, and many other German cities. 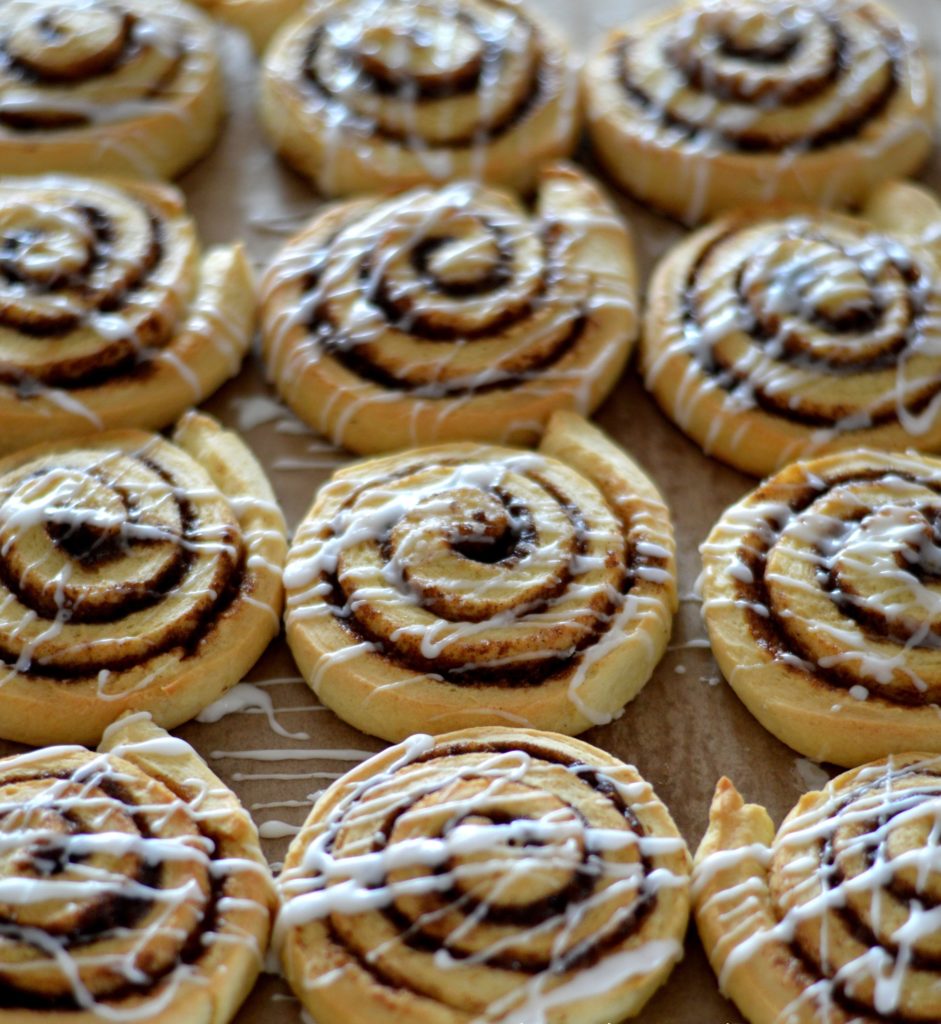 Danish cinnamon buns, known as Kanelsnegl, are made with yeast dough, butter, and of course cinnamon and sugar just like many other variants of this tasty morsel, but they usually bake up a little more flat and wide than your average cinnamon bun. They can be iced like traditional cinnamon buns or they can also be topped with chocolate for an even deeper flavor profile.

The Skillingsboller is Norway’s version of the cinnamon bun. The name translates to “penny bun” in English, and this particular variant is more exclusive to the Bergen region of Norway. They’re not as sweet as the cinnamon buns you’ll often find in America; instead, they are enjoyed as a light, sweet snack that pairs well with a cup of coffee.

Which Cinnamon Bun is Your Favorite?

The cinnamon roll is one recipe that has managed to spread all around the globe. Once it reached each part of the world, it was reformatted and given new life with a slightly different variation than the original. Since its humble beginnings in Sweden, this breakfast, snack, and dessert champion has made its rounds and has become a versatile pastry that has proven it can be tweaked and repurposed to make something creative, new, and interesting.

Have you ever tried any of these variations of the cinnamon bun, or any others that we haven’t mentioned? If you haven’t, we encourage you to try them and see just how different, yet similar, all of these cinnamon buns truly are.